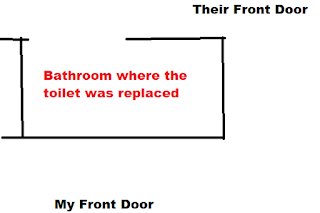 Sometime last week, they replaced a toilet in the building in a one bedroom apartment near mine. My front door faces a wall in a narrow hallway because this building is a hundred years old and just the other side of that wall is the bathroom where this toilet was and their front door is just steps away from mine and the door to the bathroom is immediately inside the unit.

I know it was replaced because I happened to be in the hallway for some reason when the work crew showed up with a big box and knocked on their door and announced that they were there to replace the toilet. And I know the layout of the apartment because that unit was the office at one time.

And I am all kinds of messed up since they pulled that old toilet out. I am having memory issues like I used to have when I was homeless in downtown San Diego which was caused by raging fever.

And I'm mad as all hell. Don't get me wrong. I have a long list of legitimate reasons to be mad as all hell. But it's almost certainly being amplified by the fever that I have been running.

When I was in downtown San Diego, I ran terrible, tarrible fevers and sometims slept 18 to 20 hours a day and I would try to keep cash on hand so my son could go get us hot food because I often couldn't go anywhere. And, also, I would go to the bathroom when we were at the library and come back and my sons would comment about me having just been to the bathroom and I would deny it. Like "What are you talking about? I haven't been to the bathroom."

I was having serious short-term memory formation problems and I was seriously screwed up.

Running a bad, bad fever and sleeping up to 20 hours a day went on for about six weeks and I had no period for that six weeks and so I was without a period for like 10 weeks total, I think. And then when my period started back up, I would bleed all over my clothes the first two days of every period for the next six months no matter how hard I tried to account for how heavily I was bleeding. I had to throw my clothes out and replace them because I was bleeding like I was going to damn well die.

And while I was going thorugh all that, one day I discussed it with my oldest son, who has read a helluva lot more than I will ever read if I live to be a hundred, and he talked at length one day about how the bad fever I had was consistent with my body successfully combatting a parasitic infection.

On our way to San Diego from Georgia -- well, from Port Aransas, where we stayed a month so we wouldn't die in the mountains our first winter homeless -- we walked and caught rides to cross the country. It took us about six weeks of travel time from Port Aransas and we were up at 7000 feet above sea level three times during that journey. And everytime we came down in altitude, I was scary sick.

We think in the low oxygen environment, the parasites were flooding into my bloodstream to feed on my red blood cells because they love iron and then when I came down in altitude, the oxygen levels of my blood went up and they were burned to death in large numbers and this made me really, really sick.

And then I got to San Diego and I bled and bled. Without becoming anemic. All those years of being anemic and taking all kinds of iron and it never being enough -- that was feeding the parasitic infection. And when they died in large numbers, my body reclaimed the iron and I bled and bled and bled with my periods for six months and it didn't make me anemic.

I'm certain I had covid-19 and it helped kill off more of the remaining parasitic infection and it's been at least six or eight weeks or whatever since that ended. So my dire state is probably not just in reaction to this toilet going. It's probably also a follow-on effect from having had coronavirus and it doing something to help kill more of the parasitic infection.

When I was in downtown San Diego, I fairly often was like "We only have 25 cents? Meh. I'm sure we will have money tomorrow and it will be fiiiine!" And I was frequently right about money showing up the next day.

So I was basically nuts and stupid in a way that was calming and I'm not brain damaged in a nice, calming fashion right now. So I don't know how I will make it through the month and this is only adding to my already high stress levels from people being assholes and blah blah blah.

I apparently have mentally lost an entire month because I completely forgot how bad last month was financially. I thought last month was one of those two months we were flush with money, but, no.

So my sons a. reminded me that last month was worse and we will survive this month even if we end up fasting for a week or more at some point b. they believe that the violent riots and such aren't in Aberdeen because of our influence and c. our problems are sort of "business as usual" for us whereas the rest of the world is basically going to hell in a hand basket.

So my sons aren't particularly stressed because our little corner of the universe isn't going to absolute hell in a hand basket and they have argued that I've played a role in that because the local police department hands out my fliers for my homeless sites and the police behave differently than they did when we first moved here. Our building used to get police visits probably multiple times a week and now they are pretty rare, so we got to see plenty of interactions with the police and how their demeanor has changed and I'm on decent terms with the chief of police and get along decently with him when I run into him at public meetings.

I mean, it's not like the chief of police and I have coffee together or I go to barbecues at his house with his family or some nonsense. I don't mean we are tight. But he personally assured me they have my fliers in all their police cars in addition to handing them out at the jail.

I mean that's my son's opinion: That I have had a good effect on this town. My version of events: I am quitting all my volunteer work and no one has any respect for me, as usual, and I have no pull and I hate everything.

I don't know how much of that is reality and how much of that is my raging fever talking. But my sons have more or less talked me down from the proverbial ledge, so to speak. Not that I was suicidal. I don't mean that. I just can't quite find a good metaphor. I'm just trying to say that I'm less stressed since talking to them.

Though I am still very very extremely far away from "happy camper" land. I can't even see that from where I currently sit.